Carrots for color, fennel for flavor, this five-ingredient soup tastes like braised fennel in a bowl. Fennel is a vegetable I find hard to describe to those not familiar with it. The term ‘anise-flavored’ is often used, but I think that sounds like more of a turn-off to most people than a selling point. And yet…and yet…the flavor is anise-y, but so mildly so that even a Pastis-ouzo-licorice hater like me can love fennel. Then there’s fennel’s texture. Raw fennel bulb is crunchy like celery but not stringy. Once cooked, fennel becomes silky and meltingly tender, miraculously without losing its shape. And finally, there’s fennel’s caramelizing capacity. This vegetable browns and caramelizes like no other to add a whole new flavor dimension to something that was already pretty tasty to start with.

It was just that caramelized quality I was after in this soup. Deeply browning fennel wedges at the start gives it so much flavor that there’s no need for anything else—not even onions or herbs. Pairing those wedges with carrots keeps the soup as brightly beautiful as it tastes—when I tried the recipe with potatoes alone, the flavor was right but the beige-ish hue wasn’t terribly appetizing.

One final thing I like about this soup is how it stretches a little fennel to go a long way. That may not be so important when I’m in France, where fennel is only about $2 a pound. But in the US, where small bulbs can cost $2 a pop, it’s a major boon.

Heat the oil in a large Dutch oven over medium-high heat. Add the fennel, and sear 8 to 10 minutes, or until the sides of the fennel pieces are a deep golden brown, turning occasionally with tongs.

Add the wine to deglaze the pan, and cook 1 to 2 minutes, or until most of the liquid has evaporated, stirring to scrape up any brown bits stuck to the bottom of the pan. Add the remaining ingredients and 1 ½ quarts/liters of water. Season generously with salt. Cover, and reduce the heat to medium. Simmer 45 minutes to 1 hour, or until the fennel is very tender. (Fennel takes a long time to cook!)

Blend the soup with a hand-held blender or using a blender or food processor. Serve garnished with fennel fronds, if desired. Makes 10 cups 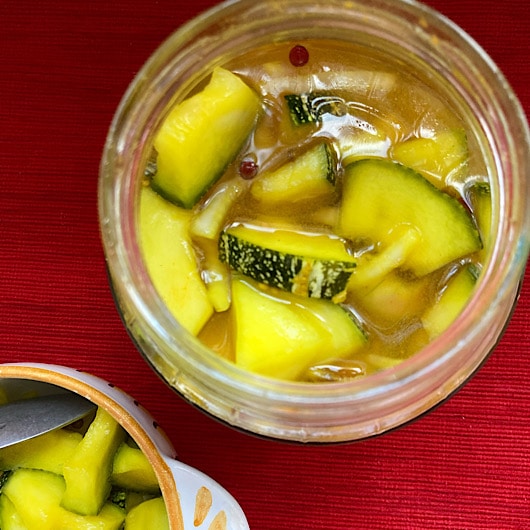